My 6-year-old daughter, D, recently went with my wife, J, to see Phantom of the Opera on Broadway. A Christmas present for mother and daughter. Upon realizing she would not be going with them, my 3-year-old, V, began to cry inconsolably. I whisked her to the Subway as she cried for her mother. To lessen the hurt, I explained to V, as we descended the stairs, why we weren’t going as well.

“You see, it is a very scary musical. It doesn’t have any of the singing and dancing you like. It is not like Matilda, or Shrek [The Musical], or Wicked.”

She replied through sobs, “Yeah, and I want to see the David Bowie Musical.”

This is a magical time in children’s lives where they assume that everything they can think of indeed exists. My six-year-old said the same sorts of things at V’s age. Everything they like is available through all forms of media. And hell, who am I to argue with a David Bowie Musical, right?! It is a world packed with possibilities and endless new experiences. Everything is new, exciting, and possible.

I look at this optimism, which really encourages me in my life. I haven’t felt that “everything is in front of me” optimism for a while. Turning 45 didn’t help. My parents turning 83 made me realize our time here is most certainly limited, and we all have less time than we think to do the things that matter. I worry about regret. Everything gets harder as you age.

My daughters pull me through the darkest days with their glass-overflowing optimism. I don’t know who I would be without them. It is both wonderful and terrifying to love them so much and for them to love me so much. To depend on my strength when at times, I feel I have less than I need.

It isn’t easy to articulate this stuff to my therapist, who doesn’t have kids. It is hard to relate to his perspective. He’s nice enough, but having kids fundamentally changes you. Sure, you can have pets, but a cat doesn’t change who you are as a human. It may change what you do. But not why you live your life. Kids do that.

This isn’t meant to shit on my therapist, but only to say it is hard for me to feel like I’m being heard. It is like trying to explain a Caravaggio to someone who has never seen a Caravaggio (see Above or visit Rome). Or heard David Bowie. Or watched Mon Uncle.

We are all getting older. The pandemic has forced many of us to focus on what is truly important. Unsurprising, most of the things we thought were important weren’t. We didn’t make time for the things that were, and now we have to put things right. There is no later. Later may not come.

My advice to you is to follow my daughter’s example. I want to believe in their new world full of possibilities, and I invite you to as well. Expect the things that excite you to exist and if they don’t exist, make them exist. Let’s not worry about how we get it done. Let’s focus on fulfilling dreams and believing it is possible because they believe it is.

I see your point, sir. I suggest a new strategy, R2. Let the Wookiee win.

IBM’s new font shares a lot of the little details which made their Paul Rand logo so great.

When D was born, I really didn’t have any idea of what to expect. Not only from the experience of childbirth, and a homebirth at that, but of what babies and later kids would mean for my life. I don’t think it is ever possible to anticipate the impact children will have and I, living in the moment, really did little to plan my next steps. Julia and I had our new bundle of joy and as usual, we improvised. At almost four years, D is an amazing little girl who loves all things stereotypically girly.

As a parent, now of a second amazing daughter V, I can say for sure that all kids are different. The lessons I learned with D are not the same lessons I am now learning with V. I thought I had figured it out, one kid down, I got this, but that is not the case. It is also like every time you think you have parenting figured out, your kids will test the boundaries where you failed to prepare. Kind of like Jurassic Park.

All that being said, my daughters are the best thing I have ever done. Some folks out there may sneer “YOUR CHILDREN ARE THE BEST THING YOU HAVE EVER DONE?” I get it. The idea that my hopes and dreams are projected on these two little girls who haven’t done much of anything at this point. Yeah, yeah. My life shouldn’t be wrapped up in my children. But on the other side, all the parents out there get it. My girls are my everything. They are literally the reason I want to get up in the morning (and often are the reason I wake up at 5:30). Their view of the world is why Donald Trump doesn’t fill me with ongoing fear. My daughters will be president. BOTH OF THEM.

They certainly have the best last name to get them there.

All this is to say, I also blame them for the lack of all my creative inklings. They are where I put all my energy. They are where my podcasts, my writings, my paintings, my doodles, and my dreams lie. Right now all the energy goes to them. But, good news, we will all reap the benefit of these amazing engines of creativity and positivity. Eventually, the compound interest in these wiggly, giggly little bank accounts of humanity will pay out dividends of awesome things. I’m sure of it.

They already brighten my life exponentially, we all just need to be patient.

Dear Diary it has been more than 2 years since my last confession.

I have been listening to David Sedaris’ Theft By Finding, which is the first collection of old diary entries spanning 1977-2002. It made me realize I really don’t write as much so used to. Chalk it up to starting a family and having a career, but the writing thing just hasn’t been a priority lately.

Just today I was on my PS4 ready for friends to come online to play some games. I realized that only one person was online and not someone I normally play with. It’s times like these that I wonder if I’m missing something. Is it the Oscars, the Emmys, or do people have actual lives?I feel like I would be the one person playing games as a world war broke loose and would be utterly oblivious to the fact.

If it weren’t for J, I would be far less connected to the world, although her tastes usually center around the deaths of celebrities than truly horrific current events… of which there are tons. I’m often taken aback by how often people in my life, especially those at work love being the bearers of bad news.

It’s never “fireman saved a kitten” or “I made lasagna from scratch and it’s in the kitchen!” Instead its something far more… dubious.

Its cliche but true, bad news travels faster than good.

Bonsai provides freelance work contract templates for creative freelancers like designers and developers. Sounds pretty cool, will give it a try on our next project for sure.

One of my dearest friends David Bartin (no not the gym guy) helped make, what I believe to be, one of the most elegant cases for why marriage is something all of us should have a right to. The documentary Chuck & Jim is all about a couple addicted to roller coasters, their dog, and each other. Chuck & Jim shows that love is love and regardless of how it manifests itself, it deserves celebrating.

Watch it with a loved one. Send it to your parents. Love somebody unabashedly.

Last night, during my wife’s story telling open mic, I told the most personal story I have ever shared. It wasn’t necessarily a good story, nor do I feel I succeeded at being as honest as I was planning on being, but it is the most raw thing I have ever said on stage in the 10 years of being on them. The story, if you can call it that, was about my fear of my life. I live my life, according to my fears.

I have done some amazing things through my fear, such as marry my incomprehensibly wonderful wife, take improv classes, and telling stories. But those moments of clarity are far overshadowed by far darker years of immobilizing fear, preventing me from taking risks, speaking up for myself, and even, at some points, from leaving my apartment. Fear has ruled my life for so long, I’m not entirely sure what my life will look like without fear.

I’m terrified of my life without fear.

So, I have decided to go to therapy. Not sure what kind, or where, or how I will pay for it; but I need to do something proactive to change the darker parts of my thoughts. I love so many parts of my life and for the most part live a positive existence, but those thunderclouds of self doubt and judgement are always hanging on the horizon, waiting to move in. If I am going to find happiness not solely based on the support of my wife (Thank you) I need to do something about it. I need to find out why I feel the way I feel and why I become immobilized, like a deer in headlights, the minute a choice outside my comfort zone presents itself.

I care about me. 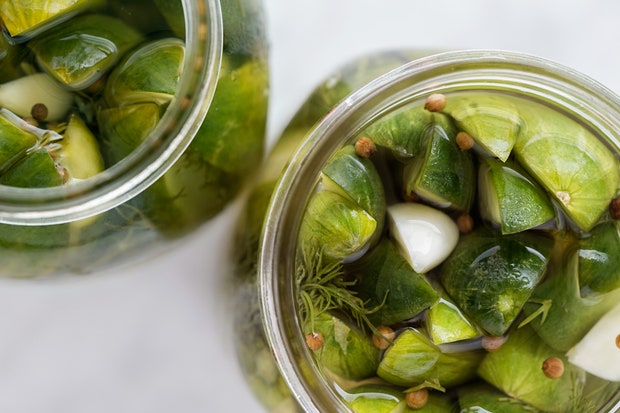 Besides my liver, I really don’t pickle much of anything. But reading Epicurious’ How to Pickle Basically Everything, I am ready to put my powers of pickling to more positive uses.

Monoid is a “customizable, minimal + legible font optimized for coding. It’s customisable with ligatures, alternates and class based positioning.” More than that, it is an Open Source monospace font (similar to Source Code Pro) and seems, at least at smaller sizes, to have a plesant tech-focused character.